BBQ and Craft Beer Festival On Tap For Big Flats! 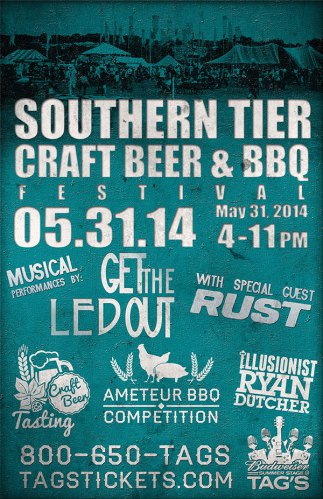 There will be an amateur BBQ cook-off, a sampling of juried craft beers to sample (and vote on) as well as many vendors, food tents and games for all.  Live music will also rule the day, with a Led Zeppelin tribute band leading it off.  Some of the nearly two dozen quality regional craft beers on hand include Shock Top, McKenzie Hard Cider, Sam Adams, Ithaca Brewing Company, Red Hook, Uinta Brewing, Fort Collins, Saranac, Wagner, Keuka Brewing, Goose Island and more.

What: BBQ and Craft Beer Festival

Hi folks, this is "Big Chuck" here. I love Upstate New York! I have written several books about the region, do a lot of public speaking around the state, am an award-winning radio broadcaster (since 1989), write a bi-monthly newspaper column and give walking tours of Cooperstown, N.Y. Yes, I do keep busy! I hope we can share some Upstate stories on this blog! If you would like to take a look at my series of Upstate New York books visit www.upstatenewyorkbooks.vpweb.com
View all posts by "Big Chuck" →
This entry was posted in Chemung County and tagged Big Flats, TAGS. Bookmark the permalink.