Saratoga Springs once again hosted its annual Chowderfest this past weekend.  The Festival Fanatics attended last year and we just had to come back this year too.

What a difference a year makes!

The number of chowder venues has increased by a couple of dozen and the crowds have increased three fold.  The sidewalks were packed with thousands of visitors all queuing up for a $1 cup of chowder…corn chowder, Spanish chowder, elk chowder, clam chowder, shrimp chowder and more.

This event, sponsored by the city of Saratoga Springs, is now among the largest festivals in the whole Upstate region.  You really should mark it down on your calender and come next year! 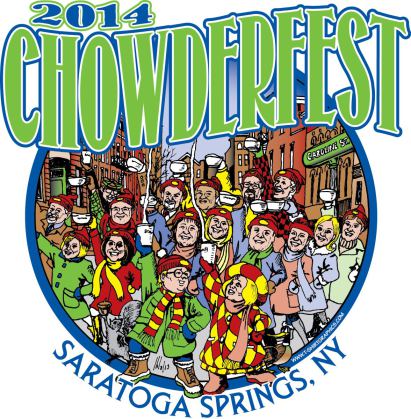 Chowderfest at the Center of Winter Weekend in Saratoga SpringsIn "Food"

Hi folks, this is "Big Chuck" here. I love Upstate New York! I have written several books about the region, do a lot of public speaking around the state, am an award-winning radio broadcaster (since 1989), write a bi-monthly newspaper column and give walking tours of Cooperstown, N.Y. Yes, I do keep busy! I hope we can share some Upstate stories on this blog! If you would like to take a look at my series of Upstate New York books visit www.upstatenewyorkbooks.vpweb.com
View all posts by "Big Chuck" →
This entry was posted in Saratoga County and tagged chowderfest saratoga. Bookmark the permalink.