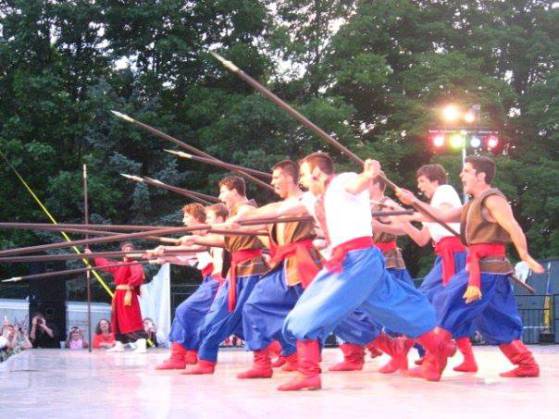 On July 12-14,2013, the Ukrainian National Foundation, Inc. will host , the largest Ukrainian Festival in the USA at the Soyuzivka Heritage Center in Kerhonkson, NY. For seven years now, the Soyuzivka Heritage Center in Kerhonkson, N.Y., has been reminding us all – via its annual Ukrainian Cultural Festival – that Ukrainians have a rich culture to share with the rest of the world. The festival, a key component of Soyuzivka’s arts program, this year is headlined by Vika (Vika Vasilevich), a singer and songwriter from Ukraine who is making her mark on the American music scene. She will be accompanied by her own six-piece band of phenomenal musicians.

Over 5,000 people are expected travel from many states around the country to Soyuzivka on July 12-14 to attend what has become the largest Ukrainian festival in the U.S.A.

Vika….The festival’s guest star, Vika, in April of this year became the first Ukrainian artist to have a song played full length in a major Hollywood film Her song “Want you” is featured in “Arthur Newman,” starring Academy Award-winning Actor Colin Firth, Emily Blunt and Anne Heche. In late 2012, Vika’s song “Magic” was featured in the action thriller “Chernobyl Diaries.” Over the last 14 years Vika has written and recorded her own songs and performed as the headliner at major music festivals throughout Ukraine, Canada and the United States. In addition to songs she has recorded, Vika has written more than 150 songs and published them in her book of lyrics titled “String of My Soul.” She tries to write and record songs of different styles and genres so that not one of her songs will sound like another. Her focus is on writing songs with a strong melody that also have meaning and will touch the hearts and souls of her listeners. She wrote the theme song for the National Children’s Music Festival and the nationally televised music contest in Ukraine “Step to the Stars” (a.k.a. “Ukrainian Idol”). Vika released her newest rock album “Guilty Dreams” in 2010 in three languages (Ukrainian, English and Russian), with several tracks shooting to the number-one requested songs on Kyiv radio stations. (You can read more about Vika on her website http://www.vikamusic.com.ua.)

Many other performers and artists will grace the Ukrainian Cultural Festival stages throughout the weekend, foremost among them the celebrated violinist Vasyl Popadiuk, considered the duke of the gypsy-style violin.

This year Mr. Popadiuk will be accompanied by his five-piece band Papa Duke. This exciting and rousing ensemble of instrumental virtuosos will provide a Carpathian hoedown with a unique and energizing blend of Ukrainian, Latin, classical, rock and jazz – best described as world fusion music. Ukrainians have always been famous for their voices. Popadiuk has toured with many prestigious troupes, including Ukraine’s Hopak National Ensemble, Kiev’s Gypsy Music Theatre Company, and the Nazarov Music Theatre Company of Moscow with whom he performed for many international dignitaries including the late King Hussein of Jordan. He was asked to accompany Soviet leader, Mikhail Gorbachev and his wife as part of the cultural entourage during a state visit to Spain where he performed for Queen Sofia. His many fans include Don Was, Tom Cochrane, Ian Gillan (whose solo album Vasyl was asked to play on) and Jesse Cook. He will be special guesting for celebrated Canadian tenor John McDermott in Toronto this summer.

Returning by popular demand is the superb Dumka Chorus from New York, under the direction of Maestro Vasyl Hrechynsky. You can expect a remarkable performance, pure perfection and well-deserved encores.

The Roma Pryma Dance Workshop under the direction of Ania Bohachevsky Lonkevych, the daughter of the prima ballerina who was the grand dame of Ukrainian dance will delight audiences with their grace, expert kicks, swirls and twirls, and fancy footwork. And since Ukrainians never have enough of dancing, the festival is thrilled to welcome the Dunai Dancers from Canada. This exciting troupe of 15 young energetic dancers is under the direction of Camille Ostapowich Allen. Their repertoire demonstrates a new take on traditional Ukrainian dance, with staged folk dances from around the many regions of Ukraine.

Many more performers will be added to the performance roster, so stay tuned for more information.

From Friday evening, July 12, to Sunday, July 14, the grounds, decks, patios and tennis courts at Soyuzivka will echo with the sounds of Ukrainian music and the daring high kicks and swirling dances that express the passion of the Ukrainian people.

Savory ethnic foods, varenyky or pyrohy (whatever your preference in terminology), kovbasa and holubtsi will delight your palate. The “Beer, Bands and Bandura” theme will quench all of your thirsts – artistic and otherwise.

The food court and vendors’ plaza – where visitors will find the most unique items of Ukrainian art and crafts, embroidery, pysanky and many souvenir items will be available – will open each morning at 10 a.m.

Each evening there will be music and dance performances on the Main Stage, followed by the traditional “zabava” (dance) to the music of the ever-popular Hrim band.

It's All About the Pig This Weekend at BaconFest 2013 in Troy!In "Rensselaer County"

This entry was posted in Ulster County. Bookmark the permalink.