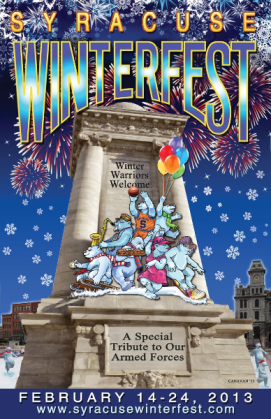 Syracuse’s Winterfest is a massive 11-day (February 14-24) extravaganza that brings more than 100,000 visitors to this central New York city.  Winterfest began in 1985 as a way to celebrate (rather than lament) the long and cold winter Syracuse is known for.

There are dozens of events, both inside and outside, covering the downtown area.  You will see almost everything at Winterfest, from live music to ice sculptures to local foods and drinks to fireworks!

In 1987-1988 Winterfest was named as “New York’s Festival Capital.”  The events are limited only by the organizers imagination.  One year they tried to set the Guinness Book of World Records for the most “snow angels.” They didn’t succeed but they did convince almost 700 to participate!

Where: Various locations around Syracuse, NY

Hi folks, this is "Big Chuck" here. I love Upstate New York! I have written several books about the region, do a lot of public speaking around the state, am an award-winning radio broadcaster (since 1989), write a bi-monthly newspaper column and give walking tours of Cooperstown, N.Y. Yes, I do keep busy! I hope we can share some Upstate stories on this blog! If you would like to take a look at my series of Upstate New York books visit www.upstatenewyorkbooks.vpweb.com
View all posts by "Big Chuck" →
This entry was posted in Onondaga County, Winter and tagged syracuse winterfest. Bookmark the permalink.